When printing in colour, an image is dissected into the three primary colours: yellow, cyan and magenta. Unlike the traditional primary colours, red and blue appear only as ‘secondary’ colours, alongside green.

The CMYK model refers to these colours (Cyan/Magenta/Yellow/Key, which mean black). When CMY combine at full strength they create the secondary colours. Combining all three completely gives an imperfect black. Unequal mixtures result in all of the other colours in between, which are known as ‘tertiary’ colours.

In the home as well as large printing presses it is common to use this technique. It allows for the reproduction of thousands of impressions so that magazines, brochures and cards for example can be mass produced.

Large printing presses would obviously use different industrial equipment compared to your home printer, in order to cope with the sheer volume of items needing to be printed.

It is cheaper to use a separate black ink rather than choosing to combine CMY. Black inks will also produce a deeper black tone. Unsaturated and darker colours are created when using black ink which makes for a better quality than CMY.

Also referred to as ‘screening’, this allows for a less than full saturation of the primary colours. The process leaves tiny dots of each primary colour in a pattern small enough that, to the human eye, a solid colour is perceived. Half-toning is how the tertiary colours are produced and does not limit a whole spectrum of colours.

Printers cannot vary the amount of ink they apply to a picture which is where screening comes in. Screening is like mixing white paint to make a lighter colour: the paper is the ‘white paint’ which breaks up a solid block of ink, giving an illusion of a lighter shade.

If you are looking to buy a printer for your office, have a look at our wide range of coloured and black printers today.

Photocopiers are essential, but expensive pieces of office equipment.

Some small or larger businesses are reluctant invest considerable sums of money in such equipment, unless they are cash rich, are unwilling to consider the interest incurred when paying for...

Five reasons why the fax machine is still essential

Despite the digital age, fax machines have become increasingly depended upon, and hence scarce, in working environments. Despite this businesses throughout the UK still invest in fax solutions, for those...

How to make your commute more productive

There aren’t many people out there that actually enjoy their commute to work. You are on the way to work for starters, but you probably have to deal with morning... 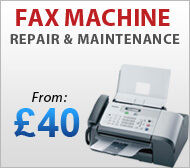